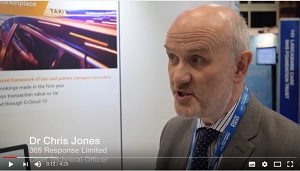 365 Response identified the need to track and audit transport bookings and processes along the care pathway to ensure safe transfer and handover of the patient at the end stage destination. Delays in the transfer of care are caused by a range of challenges within the patient journey including workforce capacity and the skills mix, and flow between organisations. When a patient’s life is at risk, a delay of even a few minutes in receiving clinical treatment can significantly affect the outcome.

Over four months in 2015, NHS Providers’ ‘Right Place, Right Time’ commission captured evidence on good practice in the transfer of care. The report estimated that such problems were costing the NHS about £550,000 every day – the equivalent of treating 60,000 patients. The report outlined how some discharges are rushed and some patients are being transferred without the right support in place. This was often because patients were not involved in the decision making.

365 Response has developed Healthcab which provides a totally new way of managing urgent care flow. Specifically designed by clinicians for clinicians, Healthcab connects GPs and community staff to dedicated urgent care and primary care transport, enabling patients to be treated and responded to faster, safely and at lower cost.

365 Response’s Healthcab Smart Platform software app has been designed with clinicians in mind and is a cloud-based connectivity platform which matches suitable NHS-funded transport and skills with a patient’s specific need – whether it is a taxi, ambulance or volunteer driver – in primary and community care. The smartphone app allows users to specify the standard of care and the skills required by the driver.

In a partnership with NHS Shared Business Services and Leeds Teaching Hospitals NHS Trust the renal patient community used the technology to transform how they were accessing health care transport. Leeds Teaching Hospitals identified that there was a significant problem with bed blocking derived from transport related issues, which in turn created an exit block for their A&E. The renal app allowed people to self manage their transport and track the journey and progress of their designated driver.

Patients are benefiting from being able to self-manage their care transport and are receiving faster response to vehicle requests. These result in less delays, fewer late arrivals at hospital and shorter waiting times on returning home. Provider/driver tracking via the Healthcab app gives patients peace of mind with real time information and less chance of health conditions deteriorating because of transport delays.

There are approximately one million urgent patient transfers made from GPs to hospitals each year. Assuming that 25% of these will require frontline ambulance support, annually there remain 750,000 calls – and therefore 750,000 patients – that could benefit from accessing other providers.

“GPs now receive a two-hour response more than 95% of the time, taking patients to hospital earlier in the day. It is all managed through a single point of access and a single booking call. Our ambulance service has delivered significant gains in Red performance across our CCG area since the scheme was introduced through protecting 999 ambulance resources for the patients in most need. Our local A&E department and hospital wards appreciate the significant and positive impact this initiative continues to have on their patient flow.”
John Darley, Head of Urgent Care, Hambleton,
Richmondshire and Whitby CCG

365 Response is a technology-led specialist private commissioning support service in healthcare transport which aims to not only reduce urgent care delays but to also address poorly managed care transfers that put lives in danger and adds significant costs to the NHS.

It was co-founded in 2013 by Brendan Fatchett, son of the former Labour MP for Leeds Central Derek Fatchett. In 1999 the then Labour foreign office minister collapsed and later died following delays in his transfer to hospital. His son was determined to make a difference, not just to reduce urgent care delays but to address poorly managed care transfer that put lives in danger and cost the NHS money.

The company was able to launch the Healthcab Smart Platform software app thanks to awards totaling £996,587 from the SBRI Healthcare programme. One year after launching the ambulance commissioning innovation has processed over 20,000 bookings and is now being used by 10 trusts, 45 CCGs and health boards connecting them to a growing network of over 100 transport providers. The technology has created five full-time jobs at 365 Response and the company has also taken on four apprentices.

Alongside the clinical impact, there are substantial resource savings to primary care using 365 response as an alternative provider. Two pilot schemes in the Yorkshire ambulance service area recently estimated direct savings of over £500,000, representing a 58% saving on current ambulance service costs. The direct savings to ambulance expenditures could potentially save up to 83.25 million* pounds per year by implementing 365 response. For a typical CCG with 250, 000 population, this equates to around £3.8 million per year.

“This technology helps NHS Ambulance Trusts to meet targets as demand grows. It removes the bottom of
the stack of calls by diverting them away from the 999 service into a lower but more than adequate skill set, which boosts response rates and saves lives.”
Sarah Fatchett, Founder and Managing Director, 365 Response

Where 365 response can impact primary care triage and transport services as a streamlined system, the estimated net annual saving to the CCG is £2.06 million per year. This represents a reduction in cost per patient visit of £33.14.

Overall, there are significant economic benefits from delivery of the 365 response transport/triage service, that fully implemented can save several hundred million pounds a year.

*Assume 1 million urgent patient transfers made from GPs to hospital each year, of which 25% will require frontline ambulance support.