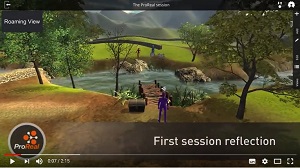 Mental ill-healthcosts England more than £105bn a year, with depression and anxiety being the condition with the highest prevalence – and poor mental health often begins in early teenage years.

A Public Health England report into the mental health of children and young people published in December 2016 confirmed that mental health illnesses are a leading cause of health-related disabilities. These can affect someone’s education, physical health, social relationships and their employment prospects for the rest of their lives. The same report claims that only 25% of young people who need mental health treatment actually get it.

There has long been a link between mental health and offending behaviour. Up to 90% of prisoners (source: Sainsbury Centre for Mental Health) have at least one mental health problem, with the incidence of depression and anxiety among adult prisoners at 45% compared to 13.8% for the general population. Could technology be used to reduce re-offending rates and improve mental health?

Users become engaged in the technology which creates a virtual representation of each individual’s world and is populated by people (avatars) and landscape props to help them explain how they see different situations, including conflict with others.

The Avatar-based therapy was first tested in a small pilot study within a private prison, where residents and staff explored the use of ProReal’s solution to encourage inmates to make visible their thoughts, feelings and experiences of the world. Overall there were improvements in the inmates’ levels of psychological distress. These include ‘remaining positive’ and ‘to stop committing crimes and become a better person’.

Subsequently, ProReal focused on provision of the therapy to young people (11 to 18 years old). Avatar-based counselling was used within a cohort of approximately 54 people to evaluate the effectiveness of ProReal in reducing levels of psychological difficulties. The use of interactive gaming and avatars was demonstrated to elicit a more honest portrayal of how a person is feeling in different situations. Using the ProReal software platform, people can access treatment easily, disclose their feelings more readily and thus accelerate their healing process.

“It made it like easier and quicker to be able to explain things because I didn’t have to speak a lot to explain something, I could just show it using the props.”
Teenager in school counselling

ProReal was founded in 2012 as a software development and management consultancy company. ProReal’s innovative technology provides its users (clients, service users, patients) with a safe, secure and confidential visual way to describe how they experience the world.

“When it comes to mental health, people can find it hard to express their thoughts and feelings and have those difficult conversations. Counsellors are used to bringing in tools to boost engagement, maybe toys or art, and using avatar-based technology is an extension of that.”
Andrew Jackson, CEO, ProReal

ProReal were awarded just over £1M from SBRI Healthcare to trial their solution in a prison setting and in Child and Adolescent Mental Health Services. Its first paying NHS client was South London and Maudsley NHS Foundation Trust which became a client following a feasibility study with patients with borderline personality disorder. The study was overseen by MindTech, Oxford Health NHS Foundation Trust and the University of Bristol.

Other organisation now on board include; Oxford Health, MerseyCare, Bradford Care and Birmingham and Solihull NHS Foundation Trusts and a number of leading third sector providers.

The NHS benefits from ProReal by saving time and money for patients and clinicians while notably improving healthcare outcomes. Moreover, the platform is a growing success outside of the national health service. ProReal has evolved into a successful UK-based global software and training company, with Motorola, IBM and Siemens among its corporate customer base.

The technology is widely used in the corporate world where there has been a 40% reduction in costs compared to using purely face to face support.

“ProReal is a fantastic example of how technology can have potential benefits for mental health… A key reason for ProReal’s success has been its ability to work with and learn from service users, healthcare professionals and academics. This has meant that its work has been informed and shaped by unmet clinical needs in a range of clinical contexts.”